YOU may have heard of fake designer bags, but do you know that there is also fake branded nail polish?

Since early this year, the sales executives of OPI Singapore – Alexis Links have become sleuths, sniffing out locations where the fake OPI brand of nail polish are being sold, said Mr Alex Lim, the company’s managing director.

Alexis Links is the sole distributor of the brand’s nail products in Singapore.

One of the company’s sales staff, Ms Irene Tan, 36, told The New Paper that she first discovered the problem when she got a call from a client, a nail salon owner, saying that the OPI brand of nail polish was being sold cheap in a shopping mall.
There was even a “buy one, get one free” promotion.

A bottle of OPI nail polish costs about $23 here, and any bottle of that brand priced below $10 is likely to be a counterfeit.

Her suspicions were confirmed when she took a closer look.

She said: “The first thing I saw was that the colour (in the bottle) was wrong; it didn’t match the code.

“The bottle looked slightly different and the smell was off too.”
She made the discovery in March.

Two months later, she received another call from another salon customer who asked her to check on nail polish they had just bought from another importer.

The giveaway signs were similar.

Said Ms Tan: “The customer told us that her manicurist was the one who spotted the difference. The manicurist said the colour was wrong and it didn’t seem to last long on the nail.”

OPI nail colours are durable and can last an average of four days on fingernails without chipping easily, she said.

Said the owner of Pastel Nail Spa: “We used to be approached by parallel importers or other suppliers claiming to sell nail polish from OPI.

“Each bottle, at cost price, was cheaper by up to $3. So can you imagine how much we could save?”

But when her customer told her that the colour was wrong and her manicurists said the smell was too pungent, she called Alexis Links and learnt that the products were fake.

The OPI brand, which started being sold here about 20 years ago, rose in popularity a decade later.

It is now the brand leader, said Mr Lim, with about 80 per cent of the market share in Singapore.
But as it became popular, so did the fake nail polish.

Mr Lim said that counterfeits became prevalent in the market about a year ago.
He said: “We rely on our sales executives to spot the fake ones. We are also alerted by tip-offs.”

Mr Lim added that the fake nail polish is produced in other Asian countries and imported by unauthorised distributors.

He is now considering taking legal action against the counterfeiters.

Lawyer Bryan Ghows said this case can be taken up as a criminal or civil one.

A police report can be made for trademark infringement. The police can then execute a search warrant and seize the counterfeit products.

The offence carries a maximum penalty of a $10,000 fine and/or a jail term of five years for each bottle found to have been counterfeited.

Said Mr Ghows: “A case can also be filed in the High Court where the complainant can sue for loss of profit.”

Customers should look for an OPI warranty seal by the Singapore agent when buying that brand of nail polish, Mr Lim advised.

Customers can look up the international OPI website (www.opi.com) to check that the colours and labels of the nail polish they buy match.

This article was first published in The New Paper

The Front
Make sure the right font has been used and that it is aligned properly, without being skewed. 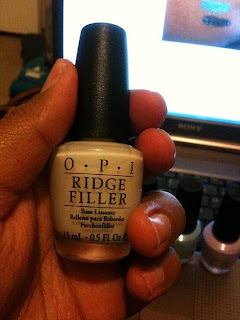 THE BACK
The address of the distribution centre in The Netherlands and the address of OPI in the US. should be on the back of the bottle. Also there are 4 warning signs that always come in the same order (as seen in the pictures) And if you dont see all 4 of the warning signs then you know that you have a fake OPI polishGenuine OPI bottle have a serial number engraved, on the side, towards the cap. You can't really see them that well, but they should be there. Now if the serial number is extremely noticable, then you have a fake OPI polish. 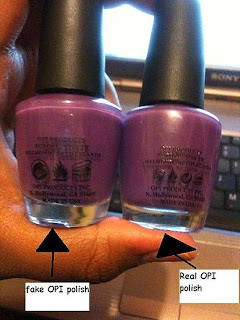 Serial Number
Genuine OPI bottle have a serial number engraved, on the side, towards the cap. You can't really see them that well, but they should be there. Now if the serial number is extremely noticable, then you have a fake OPI polish 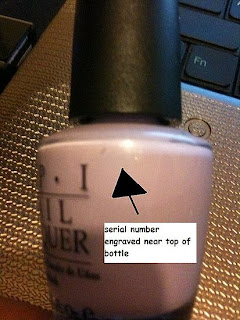 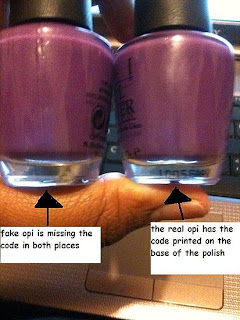 Balls
OPI bottles always have two steel balls in the bottle. If there's more or less then you have a fake polish.

PROMOTION OF THE MONTH